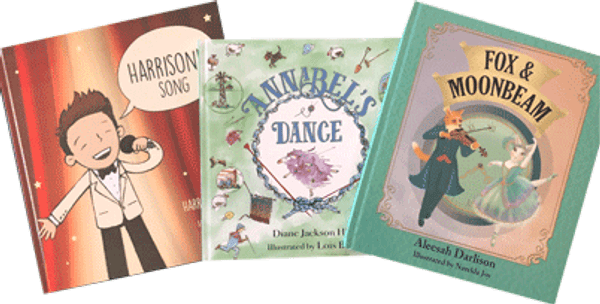 Find three great read about creative individuals and their exploration of their passions as they overcome some personal obstacles.

Harrison is a bit different to the other kids.

Each time he tries to speak, he stutters. No matter how hard he tries, his tongue feels tied up in knots. That is, until one day when Harrison discovers his talent ...

Harrison's Song tells the story of how Harrison overcame adversity because he just wanted to share the love and words inside him.

It is Victorian England and Gerard Fox winds clocks for the queen. His lowly status means he lives in a world forever surrounded by shadows.

Mademoiselle Moonbeam Lapin is a famous ballerina. She lives in the golden glow of stage lights. When Moonbeam offers Fox her friendship, both of their worlds are transformed forever.

Annabel is no ordinary sheep. She is wiggly and jiggly. Loud noises hurt her ears and no matter how hard she tries, she just can’t fit in with the mob. Until one day her supersensitive style brings her unexpected attention. How will the rest of the mob deal with Annabel now?

Around Australia in 30 Places