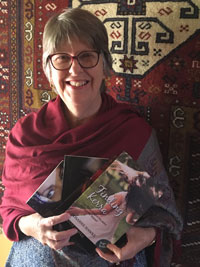 Rosanne Hawke is an Australian author of over twenty books, among them Shahana, The Messenger Bird the winner of the 2013 Cornish Holyer an Gof award for YA literature, and Taj and the Great Camel Trek.

Rosanne is also the of winner of the 2012 Adelaide Festival Children’s Literature Award for Taj and the Great Camel Trek. Her other books include Marrying Ameera and Soraya the Storyteller which was shortlisted in multiple Australian awards in 2006.

Rosanne was awarded an Asialink Fellowship to write in Pakistan in 2006 and the Carclew Fellowship in 2008. Rosanne was an aid worker In Pakistan and the United Arab Emirates for ten years and now teaches Creative Writing at Tabor Adelaide. She is a bard of Cornwall and lives in rural South Australia in an old Cornish farmhouse with underground rooms.

Rosanne is the author of Dear Pakistan, The War Within, Liana's Dance and Finding Kerra. She is also the author of Mustara and Chandani and the Ghost of the Forest which are published by children's book publisher, Wombat Books.