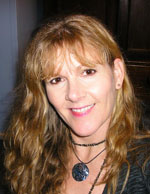 With over twenty years’ experience working in schools and privately, Dawn enjoys helping students with learning difficulties to develop literacy skills, enjoy reading and find self expression through their own writing. Dawn also tutors HSC English and runs writing workshops for Schools and libraries.

Dawn has been a bookworm all her life and a little embarrassed to admit she collected stamps as a child. She also enjoys travelling to foreign countries, especially Great Britain, where she was born. When she was twelve, Dawn’s family moved to Norway to live on an island.

Dawn loves animals and with her husband has two border collies, a cat and a horse. Dawn’s hobbies and interests include drawing, photography, bushwalking, noodling around on the piano and gardening. She is incurably mad about robots & dragons and loves gadgets. Writing books for children is the easiest way to get all those weird ideas out of her head and Dawn loves it when readers enjoy her stories.

In adult writing Dawn has been published in magazines such as New Idea, Dog’s Life, Australasian Record and Adventist Review, (a Christian magazine) for which she won an award.

Her most recent chapter book for middle grade readers, The Anything Shop (Wombat Books 2011) was released with Teacher’s notes. Dawn is currently working on a Young Adult fantasy novel, Flight.

Speaker Topics
Dawn offers talks and workshops which encourage kids, especially boys, to get into books and express themselves more clearly with their own writing.