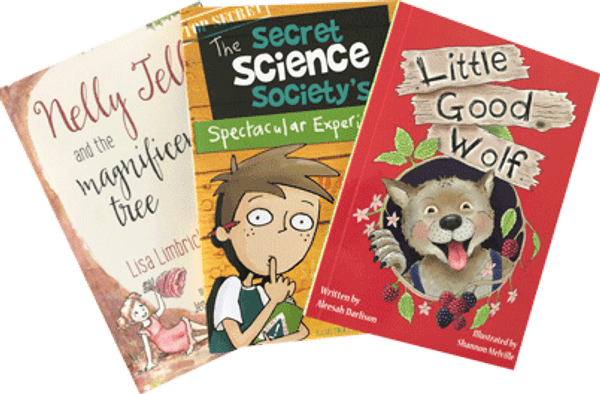 Take on these three chapter books and explore how each different protagonist overcomes the challenges they face.

The Big Bad Wolf scares girls in red capes. He chases grannies in their nighties. He blows houses down and frightens little pigs. No wonder no one will play with Little!

Determined to gain acceptance at school, Little begs Dad to find a new job. What follows are some rather hilarious, and hair-raising, adventures. Will the Big Bad Wolf ever find a new job? One that will help Little finally make friends?

Nelly Jelly and the Magnificent Tree

There’s only one thing that Nelly dislikes more than jelly, and that’s heights. In fact, she’s terrified of high places! But when she has to climb the magnificent tree to rescue her younger sister’s doll, Nelly has to not only face her greatest fear but a series of unexpected

Join Nelly Jelly and her friends for what will be a hilarious, fun and GROSS adventure up into the magnificent tree.

When the four of them are put into The Secret Science Society together, this could only mean one thing: DISASTER!

Will they be able to work together to create an experiment that Mona won’t moan about, Kiki knows is safe, Bart will think is perfect and that is really, REALLY exciting for Zane?

But ssssssshhhhhhh, the ending is a secret.