How do a series of illustrations become a picture book? The process begins with an email from a potential client asking if I am interested in illustrating a book. For Oswald Messweather, that email came in late 2018. After having a read of the manuscript, it was easy to say yes. The writing was lovely and I could already see a sketchy version of a boy called Oswald in my head, struggling with this and that, maybe a few swirls around him, maybe blues, oranges, maybe nervous, scratchy lines.

When this thought process begins, it means I can develop something more genuine. If no visual hints start popping up, the project may never work, as I find it very hard to force creativity. You can, it’s a job after all and I work even when I don’t feel like it, but there’s a magic that happens when you’re authentically creative. What this feels like and how it occurs I’m sure is different for each creative person, it’s a bit hard to explain, but you know it when you feel it, losing your sense of time, bubbling excitement like Christmas Eve when you were a child, analysing everything from a different angle, a much more interesting one that no one has ever seen before. 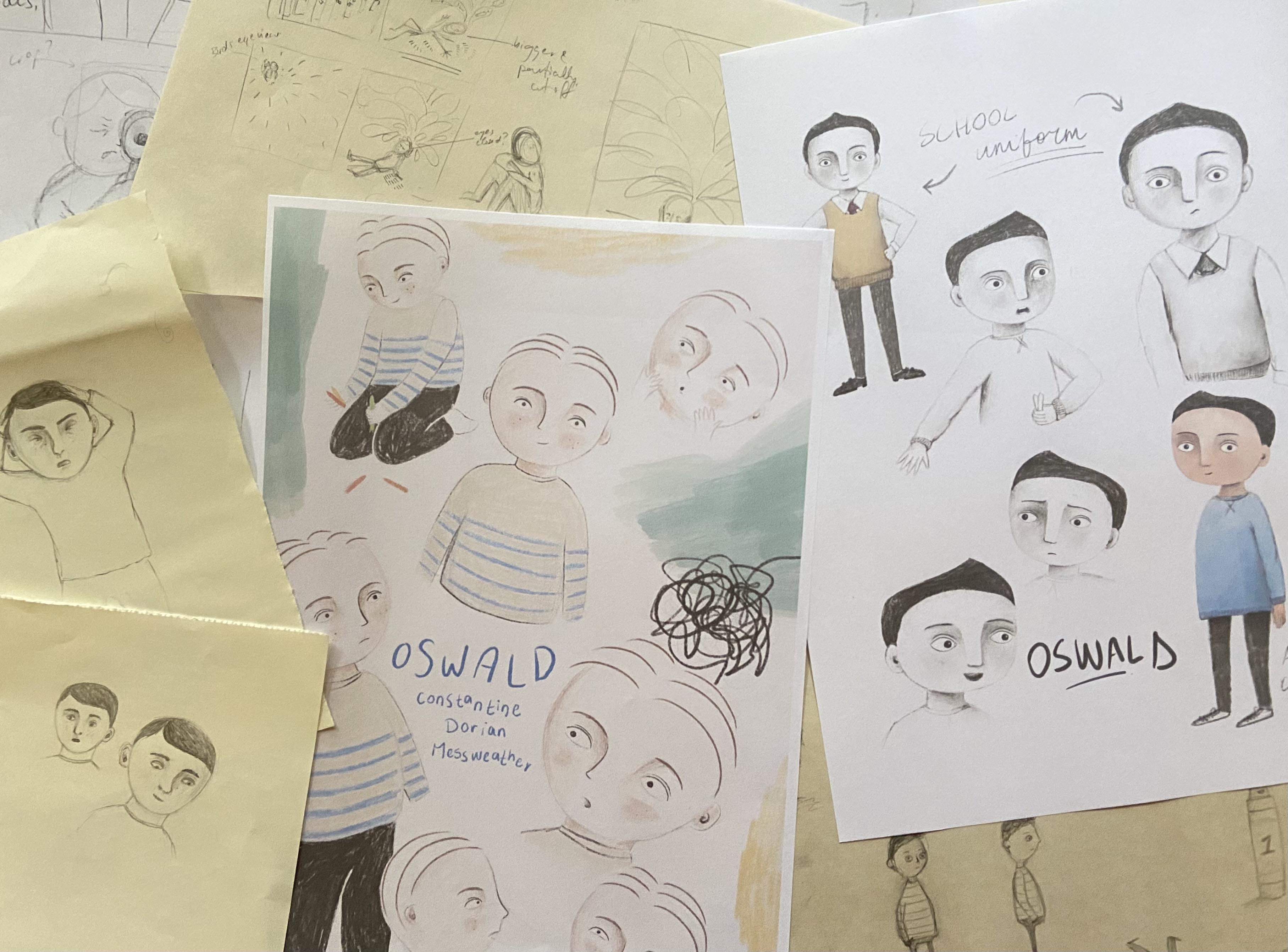 First I start on character sketches and thumbnails, which are tiny double page layouts that let me see the whole picture book on a single page. You’re looking for a flow, a synergy of perspectives, close-ups versus whole environments, a rise and fall of illustrative elements to match the story’s arc. Then I think about texture, colour, a visual partner to Dimity’s writing. In the shower I wonder if the teacher’s hair should be red. As I’m falling asleep I debate adding in a school bag monster. It’s hard to switch off from this, but I’ve found and accepted that there isn’t the same work/life balance as an illustrator compared to non-creative careers.

This experimental stage is where self doubt can also appear. Why doesn’t this look as good as in my head? How can I make that swirl more swirly? What shade of blue seems both scared and calm? When I first had these thoughts, I felt a fraud, and as though I were the only one in this industry to doubt my creative potential. I now know successful illustrators whom I admire also feel this way, so if you’re doubting yourself, acknowledge it and move on. Having standards is a good thing, but make sure it doesn’t prevent you from delivering results. 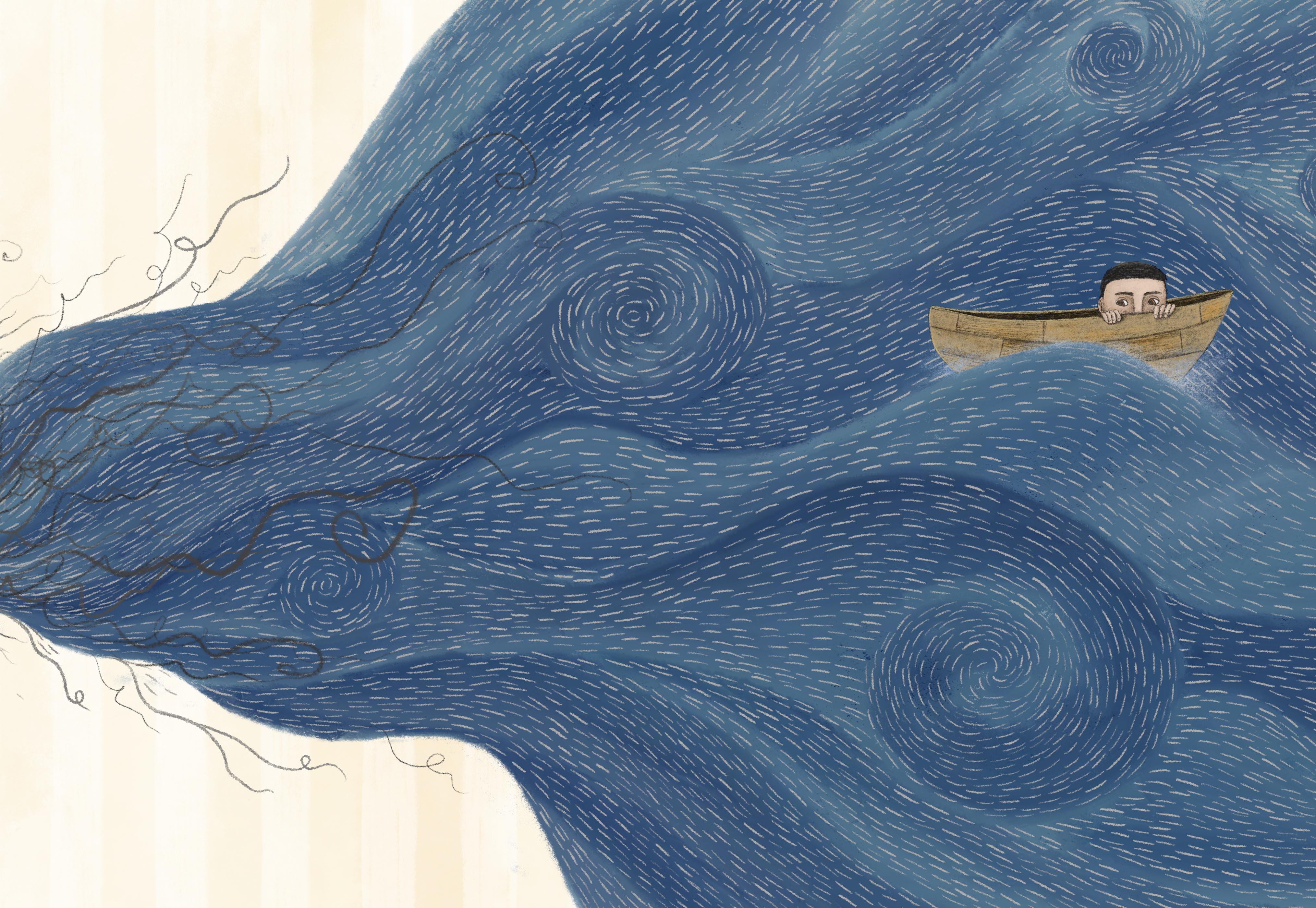 When your roughs have been approved, it’s time to move to the next stage: the final illustrations. If you’ve planned all the other stages so far, this part can go pretty smoothly. I chose to illustrate Oswald digitally for a couple of reasons. Firstly, I could draw with thin, scratchy and smudge proof lines to show Oswald’s fragility, while easily erasing areas for high contrast texture, such as within the waves of Oswald’s fears. I could also show clear colours layered upon each other, like when Oswald realises his crayon’s potential, or the bright swirls of possibility when he is dreaming.

Once you’ve sent the files, including the cover, any additional interior illustrations and promotional material, you can sit back, have a cup of tea and smile. Then it begins again. 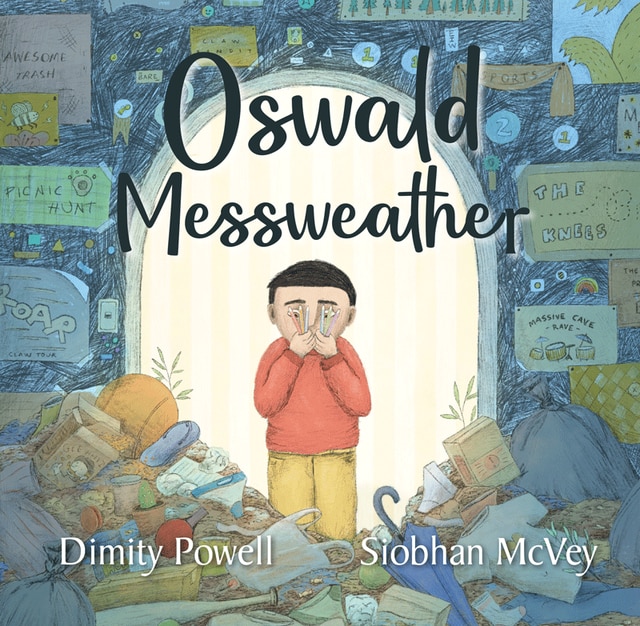